I spend a lot of my time drinking coffee in many of Manchester’s various coffee houses/shops/lounges; the city’s unyielding hustle helps me unwind and concentrate and there’s no better coffee than in these top spots.

So, if you’re wondering where to go for coffee in Manchester, whatever your needs, I can probably help you out. Here are my top five coffee spots:

I like that it never gets too busy here. The atmosphere is relaxed and is good for catch-ups, or a slow afternoon reading. Inside is a little bit dark – atmospheric, shall we say? – but if you do want  to sit somewhere brighter, there’s seating outside in the atrium that’s as much a pleasure on rainy days as it is on those rare bright sunshine filled Manchester days. 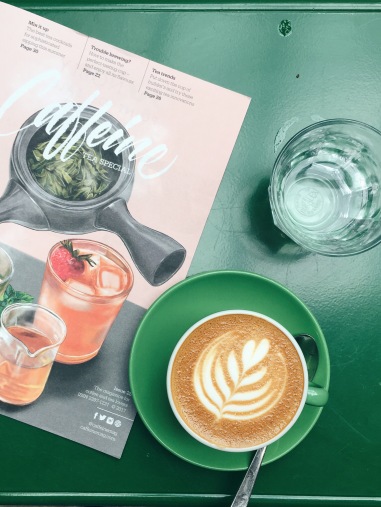 Since Ancoats Coffee Co. is first and foremost a coffee roasters, you can expect the staff to know all there is to know about what you’re drinking as well as serving the very best coffee.

Takk, (the Swedish, Norwegian and Icelandic word for ‘Thank You’) is inspired, unsurprisingly, by Nordic coffee houses. It’s a cosy, homely space that’s welcoming to those wanting to work creatively and since this part of the NQ is home to lots of creative industries, it means Takk is almost always busy. They serve their own Nordic style espresso and a range of coffees from around the world.

A sprawling coffee house (the largest in Manchester, I think) whose look is rooted in industrial Manchester and is awash with Scandi cool, with more white tiles than the New York City Subway. Because it’s so big, there’s plenty of seating options whatever your needs and there’s usually as many people in groups (business people, mamas, students…) as there is drinking solo. My only gripe is it’s so big I wish I could order coffee from the table so I didn’t have to leave my things out of sight (or lose my spot) while I queue for more coffee, which is inevitable.

When NTP arrived in 2010 there was nothing like it in this part of the city. They’ve always cared a lot about their coffee here and have been pioneering in their methods and offerings. I had my first ever flat white and my first ever cold brew at NTP before any high street chains had even caught a whiff of what was to come.

It’s a small but generous space inside with a large communal table that sets the tone for the industrial feel of the place, often busy with people reading the papers, or working on laptops, and there’s several smaller tables scattered around the edges that are usually bustling with couples or friends schmoozing. There’s outside seating, too. Funnily enough, despite the name, I don’t think I’ve ever had a tea here because the coffee is, and always has been, so damn good. 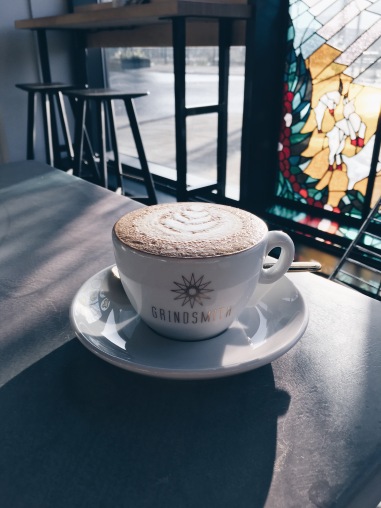 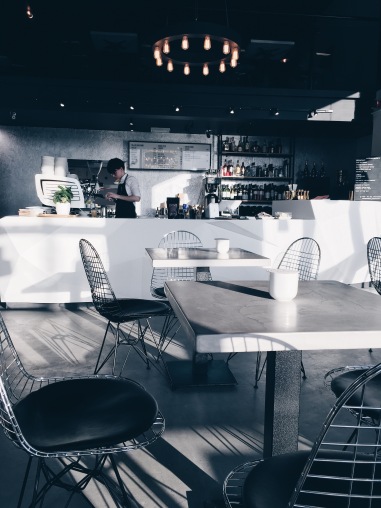 Grindsmith is beautiful: the colour palette with its smatterings of gold and the interior are stunningly put together. The coffee is prepared, painstakingly, with the utmost care. If you come in the afternoon, you’ll get to see the stained glass window in full effect as the light pours in over the ground floor. There’s also a Grindsmith on Deansgate and a Grindsmith pod on Greengate Square – both worth checking out. Expect to rub shoulders with those in the know from TV, radio and the up and coming businesses in offices nearby.

Finally, I can’t write a post on coffee shops without mentioning Idle Hands, another of my favourites who are deeply invested in serving quality coffee. They were temporarily situated on Piccadilly approach until they found a suitable home (you can read more about it on their blog) – until then, find them at Grub!

This site uses Akismet to reduce spam. Learn how your comment data is processed.